Our first visit was to the “International Center of Mary of Nazareth” administered by the community of Chemin Neuf.

Then we left Nazareth, heading for the Zippori National Park. “Why is it called Zippori? Because it is perched on top of the mountain like a bird,” (Babylonian Talmud, Megillah, 6a) The day was very hot so we decided to spend more time visiting this fascinating place and not to walk down to Cana, which could have taken us 3 – 4 hours. We noticed a guide just beginning with a small group and when we approached he said that he was a volunteer guide and the group was Hebrew speaking but that he could give us a summary in English.

Within half an hour the rest of the group had abandoned him and he was left with only us! He spent at least another hour with us after that. We called him our angel – he was wonderful! And what an amazing city this must have been, just a few kilometers from Jesus’ home town. Did Joseph ever come here to do some carpentry work, accompanied by his son?… One tradition says that Mary was born here, that this was the town of Joakim and Anna… Was it Mary, raised in this modern, multi cultural city that formed in Jesus his spirit of openness?… We were struck by the beauty of some of the mosaics, especially the one known as the Mona Lisa of the Galilee, in the house of a wealthy man called Dionysus.

Just before leaving us our guide took us to the ancient synagogue where we saw a wonderful audio visual about the death of Judah Hanasi, redactor of the Mishnah.

We then had our picnic lunch and drove down to Cana to visit this town where Jesus turned the water into wine at a wedding feast, before returning to Nazareth. 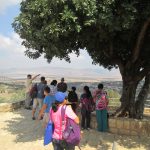 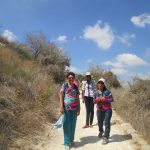 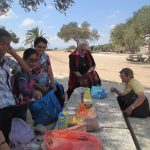