We had three sessions with Br. Elio, nds about the life of the Fr. Marie Alphonse and his relationship with Fr. Theodore. We certainly enjoyed hearing about him and the importance of his life in the congregation.

Fr. Alphonse had a special and close relationship with Fr. Theodore. They had their own way to communicate with each other since their personal letters had a deep and special language which was different from others. So, we needed to be careful when we would read and interpret them.

Theodore and Alphonse had a strong bond of trust between them, they also had a profound love and compassion as they tried to do the will of God. It was their good relationship that helped them to be self-critical in their discernment of the work of Sion.

Fr. Alphonse did not lack confidence, he was very interested in the work of Fr. Theodore since at that time he was in his novitiate with the Jesuits. He had much communication through letters with Fr. Theodore. His brother wrote to him about the beginnings of the work of Sion, and so many times Fr. Alphonse helped him to discern by asking good questions and also giving by advice and suggestions. We could see how Fr. Alphonse had a vision and a wisdom for the future of Sion right from the beginning. Fr. Alphonse reminded Fr. Theodore:

“He led me to the foot of the manger, and pointing to the straw on which the Child Jesus was lying, he said to me: “Here is our treasure!” He seemed happier than ever by making me understand that the Sion work should not rely on financial resources; And that the Blessed Virgin herself having raised and founded it, we should leave the present and the future in her maternal hands” (Mes souvenirs, p. 213-214.)

Fr. Alphonse had many difficulties in Jerusalem but never lost his hope and faith. He never gave up his projects with the boys and the girls. He wrote in the annals on May 20th, 1877:

“Wars! Famine! Epidemics – all the calamities, all the plagues, all the dangers at the same time threaten us. There are hardly any more left to work in the fields. Besides this, lack of rain, drought, extraordinary and premature heat. No harvest… Poverty increases day by day… The population is more numerous at the doors of our convents and at the doors of our dispensaries. The diseases increase with poverty and hunger.”

It was very hard at this time but he continued with his work and had confidence in God´s providence.

In addition, he had a clear vision of what he wanted to do according the will of God. He wrote to Me Donnez Gaudry on November 12th, 1865.

“I did not come here only to raise stones on stones. I also wanted to raise moral ruins – by educating the poor children of the Holy Land.”

He had a great vision for the education of the youth. Fr. Alphonse had many difficulties and knew injustices in his ministry, but he was a man who had the courage to continue in his mission and call until his death.

Fr. Alphonse had a deep spirituality and vision for the congregation as Abraham who left from his country to follow the will of God. From beginning to end, Fr. Alphonse walked in the hands of God from when he left France for Jerusalem. We cannot understand Fr. Theodore without Fr. Alphonse because both are part of our history and if we separate them, we destroy the deep unity and trust that they had between them in building the congregation.

“From our family only me and you remain. Two Priests that must be just one heart and one soul.”

(Fr Alphonse wrote to Fr. Theodore, December 9th, 1883.) They walked together until the end of their lives. They moved together in the land to cultivate the little Sion’s seed… Now is our time to see the furrows that have been planted and to continue planting, harvesting and giving the good fruits to the Church, to the Jewish people, and to the world. 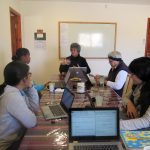 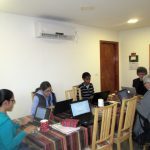