This is a very brief account from numbers of points of view. I am Sister Alejandra from Guatemala. I made my Novitiate in Jerusalem and after my first vows I came back to Central America. Currently, I live in Nicaragua with Sr. Ana Maria who has been serving the Poor in Nicaragua for more than twentyfive years. Now I have been in the Barrio, “El Recreo” for more than one year. I share the ministry of our Sisters of Sion in “Generando Vida” who have been there since 1990. Our new mission at the time was to live there and to be good neighbors while at the same time teaching at the Jesuit University, LA UCA. Originally, this Congregation of nuns arrived in the Barrio “El Recreo” and realized that the people, mostly children, suffered from malnutrition. The sisters and volunteers began with the problem of malnutrition among those children. Little by little with an increase in numbers they created a comedor a Soup kitchen.

Now we provide food for 125 children every day. As the time went on the children requested help with their homework. So, the sisters helped by providing a library. The first books in that library came from Cuba. Now our library serves many children and even some adults. We serve more than one hundred children every day from first grade up to students at the university level. At the same time many householders needed financial assistance because the needy cannot borrow from the banks as they do not have any warranty to repay their loans.

Presently, there are 400 barrio women participating in a developmental program even though allows them to start a small business of their own.

We also have a program where we attend the residents who have health problems, providing them with some medicines, for example at lower cost. The residents pay what they can it.

When I came to work in El Recreo I began in the morning helping with most of the programs from my office, and in the Afternoon, I go to the library to help the children with research and to complete their homework especially with their reading and they enjoy games.

Once a week I am part of the developmental team which visits the poor women in their homes. I confess I do not know or understand completely the realities of these women and their families living in such impoverished conditions as they do. 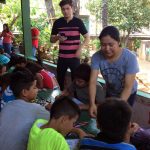 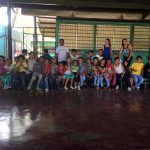 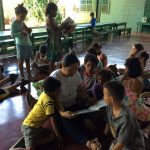 I really appreciated my formation in Jerusalem because it gave me many international experiences and also a level of Spirituality to understand the Scriptures. I also became acquainted with other languages, such as Arabic and Hebrew and cultures and different their Religions expressions and Jewish feasts.

In the future I plan to Study Scripture more hopefully on a full time basis. With other members of my Sion community. Now I study English with a kind friend who teaches me once a week.

Well, finally I have learned to be more humble and not to judge the people in the Barrio or their difficult realities. It is a gift to be able to serve them.