Last Sunday, December 16th, we, Juliana, Iula, Erica, Helen and myself, made a pilgrimage to Bethlehem of Galilee.

After a deep study on the subject: Is not Bethlehem of Galilee mentioned several times in the Bible?  The town was part of Zebulun region, as described in Joshua:19,15.

We wanted to see what happened with this ancient city. Are there any Christian traces which could enable us to perhaps think that it is the Bethlehem where Jesus was born?

So we really felt like pioners exploring something very unusual. It was a very real emotion when we approached the place and saw the sign: בית לחם הגלילית. It was not a dream, it has existed until now.

When we arrived, we discovered the Israeli Jewish village (a moshav), an agriculture village.

No one was around. A house was indicated as office. We entered and a man gave us a history of the moshav and its activities, but nothing on the past.

By chance we met an elder woman, Sara and she told us, “My husband (Yaron) knows every single stone in the village.” She called him and he indicated where we could go to see something of the past.

First, at the entrance of the village was a Byzantine Church with beautiful mosaics (said Yaron) which had been discovered when they built the road of the village (5th-6th c.AD).[1]  We went there…No traces …Only a field covered with wild vegetation….But we beleived ! 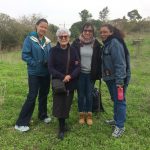 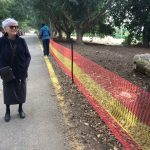 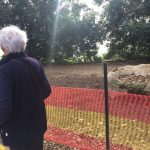 Then on our way we saw several old buildings dating from the Crusaders. One of them was very beautiful and has been transformed into a synagogue.

Tow enormous stones with a big hole in the middle which could have been a place of crushing wheat or olives.

Added to that, in another village nearby, called Alonei Aba, there a little Church built in the beginning of the 20th century by an Evangelical community. Nothing more.

We were not disappointed. This place has remained unknown, but at least a little group of Sion found it and acknowledged it.This was for us another way to prepare for Christmas.

Has Jesus been born there? All his family was belonging to Galilee, and this village is about 10-15 km from Nazareth.

Did the Gospel and the Christian tradition adopt the Bethlehem of Judea because it is the city of David and also because of Micah’s prophecy?

It is good to remain with the unknown, that is also part of the mystery of the Incarnation.

Jesus was born, we believe it!  He was from the tribe of Judah and the descendant of David. He is the one we will celebrate at Christmas in thanksgiving, joy and hope.

We ended our pilgrimage at Nazareth with the parish mass in the basilica of Annunciation another humble city unknown in the Old Testament, where Jesus had been conceived “And the Word was made flesh and dwelt among us”.

[1] It is on display at the entrance to the passport control in the Ben-Gurion Airport. It features animals, birds, trees, grapes, and geometric patterns.

The ancient village reached its peak in the late Roman and Byzantine periods (2nd-7th c. AD). The ruins of the village covered a large area of the modern Moshav with an abundant remains of foundations of “ashlars” (cut blocks), bases, structures and columns, installations such as oil presses. There was also an ancient synagogue (as described by Gurin in 1860) and/or a church.

In later Roman periods (2d c. AD) the site was Jewish and one of the 24 Mishmerot Cohanim villages and cities settled here after the Bar-Kochba revolt, and served in the synagogues until the destruction of the village.

Sr. Anne-Catnerine NDS, together with the 5 of us ( research, writing, photos, driving)