The class with Sr. Anne was about the Tisha be Ab. Tisha be Av is a memory of the destruction of the First and Second Temple. According to the tradition, on the Ninth of Av, it was already decreed upon our ancestors that they would not be allowed to enter the Land of Israel. Therefore, it is a commandment to mourn on Jerusalem starting with three weeks from the 17th of Tammuz. We can read the destruction of the First Temple in 2 King 25 and Jeremiah 52: 12-27.

Looking at the provided texts and commentaries by Sr. Anne, there are some reason why the Jewish people have to mourn. The First Temple was destroyed for three sins of Israel: idolatry immorality and bloodshed. On the other hand, when the Second Temple was destroyed, Israel was already occupied with studying the Torah and practicing the commandment and good deeds. So, why in spite of that the temple was destroyed? Because there was hate without motivation and nobody challenged anybody. Some people say, the evil tongue also caused the destruction of the Second Temple (Talmud Yoma 9b). the tradition says also that the Lord wept when the Temple was destroyed, as in Lamentation Rabba proem &24, says: “Woe to me, what have I done! I cause my Shekinah to dwell below for Israel’s sake and now that they have sinned I have returned to my original place”. But Tanhuma and Exode Rabba on Ex: 3:1 says that Shekinah never leave the Western wall of the Temple – “he stands behind our wall” (Song of Song 2:9).

We could say the Lord wept on Jerusalem and it must be the duty of the Jewish to weep on Jerusalem as it is said in Isaiah 66:10 – “Rejoice with Jerusalem and be glad for her, all you who love her; rejoice greatly with her, all you who mourn over her”. As what the Rabbis have said: “everyone who mourns for Jerusalem merits to share in her joy, and anyone who does not mourn for her will not share in her joy”. Sr. Anne conclude the discussion by sharing our reflection and insights from the class. Then she left us with the reflection looking at this Jewish memory in relation to Jesus – when he wept for Jerusalem – in his deep compassion for the suffering of the world and its sinfulness. His weeping is necessary to water and let grow the seed of joy of the redemption, the fruit of his death and resurrection and restore the fullness of the presence of God (Shekinah) in the world. 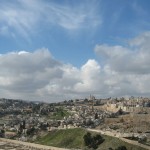 view over Temple mount and Jerusalem 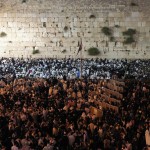 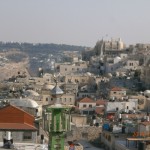 the Jewish quarter in Jerusalem. 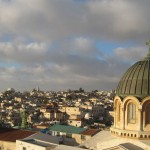