During the month of May, we celebrated as a Sion community three events which remind us of the importance of the priesthood, not only for the church but also for the world.

“Every high priest is selected from among the people and is appointed to represent the people in matters related to God,… He is able to deal gently with those who are going astray since he himself is subject to weakness. This is why he has to offer sacrifices for his own sins, as well as for the sins of the people.” Hebrews 5, 1-3

On May 6 we commemorated the 135th anniversary of the death of Alfons Ratisbonne, one of our founders. Who, after the apparition of the Blessed Virgin Mary became a Christian and later a priest. He was from that moment the main collaborator in the new work of his brother Teodoro. Alphonse was a more resolute character. His was the inspiring and energetic vision for the foundation in Jerusalem.

During this same celebration presided over by Leopoldo Girelli, brother CRISTÓVÃO OLIVEIRA SILVA received the ministries of the lectorate and acolyte in order to continue his path towards the priesthood. 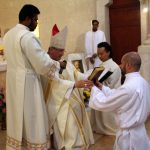 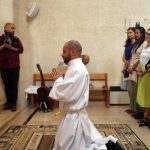 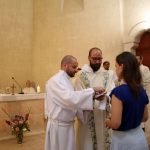 Also on May 16 in the church of Our Lady of the Ark of the Covenant in Abu Gosh, there was the priestly ordination of Benedetto Di Bitonto, by Archbishop Pierbattista Pizzaballa; for the Vicariate of Saint James, dedicated to Hebrew-speaking Catholics. This was a moment of great joy and universal sharing since it was attended not only by his family: parents and friends but also by people who came from abroad, priests of the Latin Patriarchate and seminarians of Beit Jala, religious men, and women of different congregations , families from the communities of migrant Coptic monks and Jewish friends. 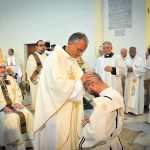 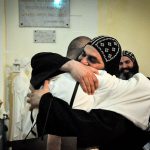 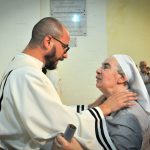 Why the priesthood is a gift from God for the church and the world?

During his ordination, the Priest receives the power to act in the person of Jesus Christ. Then, when pronouncing words such as “Because this is my Body” or “I absolve you from your sins,” it is Christ who acts through him, to pour out the spiritual benefits over souls.

They are chosen to be other Christs on earth and God’s light for others, not only in what they do but in who they are.

We know that they are not selected by personal qualities as a capacity for dialogue or listening (which many of them develop with great effort) because Jesus chose his disciples who were not perfect, who had many mistakes. But certainly, the logic and the call of God goes beyond the superficial. This condition of human frailty did not limit them in undertaking the mission that the Lord entrusted to them and so that God’s will works wonders through them. At the same time, these men seek to give in the midst of their weakness the best of themselves in their service every day.

For this reason, we must understand how important it is for that priest, who can be a source of hope and a manifestation of the presence of Christ in a world that is currently so disturbed and confused. Our prayer, companionship, and support ae needed. We are also part of this ministry.