“Posadas”, Christmas Caroling, are part of the Christmas traditions celebrated in many countries. The tradition said that Posadas have to begin on December the 16th and they end on December the 24th. So it is like a novena; these nine days before Christmas represent the nine months of Mary’s pregnancy carrying baby Jesus. People participate in the Posadas as processions that re-create the journey of Mary and Joseph when they were searching for a place for Mary to give birth.

This year the Novitiate Community has done the Posadas visiting the NDS Communities in Jerusalem and Ein Karem. We began our preparation choosing our own repertoire of Advent and Christmas songs; including songs in our different languages (German, Bahasa Indonesia, Portuguese, Spanish and English). Then we started practicing with the help of Brother Tiago who has been with us in each Posada. We also prepared some gifts for our Brothers, Sisters and friends. We gave them a bottle of homemade vine and some bags with sweets and nuts.

Our first Posada was visiting the NDS Brothers in Ein Karem. We also counted with the presence of Joel, a NDS Brother from the Ratisbonne Community, Luciano and Cema, NDS Associates from the Brothers and Olga, a volunteer from Poland. We had a joyful evening singing our songs and also sharing a tasty Brazil Christmas food that the Brothers kindly prepared for welcoming us. We enjoyed our time with all our Brothers and Friends. 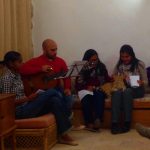 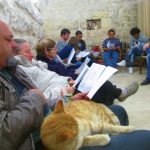 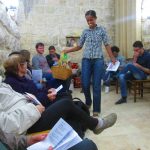 Our second Posada was visiting the Contemplative Community in Ein Karem. The Sisters were so happy to receive us and we were very happy too because we had the opportunity to share with them our songs. Even though we do not speak French and some of them do not speak English that was not a difficulty to have a nice evening together. It was so lovely that the Sisters added a French verse in some songs in order to join us. We finished our Posada sharing some tea, bread and cookies. 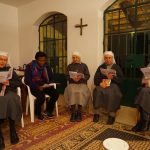 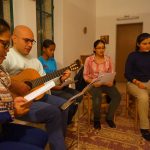 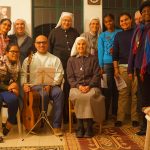 The third Posada was in the Apostolic Community in Ein Karem. Some of the Brothers and Olga the volunteer were also there. As soon as we rang the bell of their house and they opened the door we went inside singing. After entering, we continued with our repertoire. We appreciateed very much the welcoming of the Sisters who shared with us an appetizing meal. 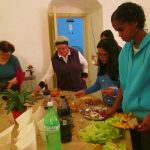 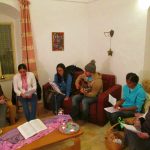 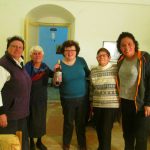 The fourth Posada was in the Ecce Hommo Community. We were like 20 people since the Chemin Neuf Community, and two volunteers also joined us. We sang some of our songs and the Chemin Neuf sang some in French. Besides,we heard two songs in Arabic. At the end of the Posada Sister Maureen played Silent Night and each one sang it in their own language. We closed our time together having some snacks, taking pictures and sharing a nice meal. 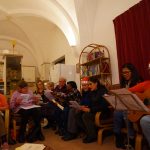 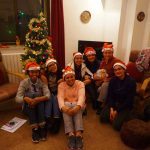 The last Posada was in our own house. We invited Sister Rose Teresa and Sister Carmen for our presentation. It was a wonderful evening sharing a meal and listening some memories that the Sisters told us about the Ein Karem House and Ratisbonne, the NDS Brother’s house in Jerusalem. We enjoyed being together as NDS family. 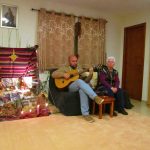 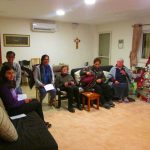 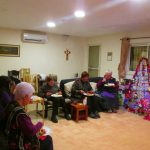 We are very grateful with God for this enjoyable experience and we thank all the NDS Communities and friends who kindly opened their houses and hearts to receive us. We also thank very much Brother Tiago for all his help and generosity during the Posadas.