Vocation leaflet in Brazil begins with â€œJesus is saying: Let’s go and meet the Congregation â€œOur Lady of Sionâ€,

Sr. Jacky and Sr. Mary Carmen arrived in Berba on Wednesday, October 3, 2013. The Gospel for October 4, which is also the feast of St. Francis, was Luke 10:1-12. â€œAfter this the Lord appointed seventy-two others and sent them on ahead of him in pairs to every town and place where he himself intended to go.â€ The disciples are sent only to places where Jesus himself wants to go. Jilvaneide and I are visiting sisters, we meet faith communities and individuals in the city of Rio de Janeiro and up in the North-East, Santo Amaro, Divina Pastora, Aracaju and Salvador. We go two by two and come to places where Jesus himself wants to go.

After arriving Monday the 7 of October in the evening around 10 pm,Â  the morning the next day I visited the school of Sion in Rio de Janeiro where my first impression showed me the past glory once shared in Sion when we where many, living and serving in the Mission of Theodore. The sisters in their joy and in the service of the children ashamed me when I look at the ages of this sisters who serve with all the hope and joy the Charism of Sion, either in the school, library or pastoral vocation center.

When I learn about this big country, which has 190 million inhabitants, many different kinds of fruit and a colorful population, I realize that each family reflects the reality of the country. Sr. Ivone says: â€œMy family is very large and you will find in it every color.â€

I arrived in Santo Amaro, a village of about 13,000 inhabitants, where one house is built right next to the other; it has wide streets, and the land yields its fruit in due season. I saw how much rain is a blessing.

I met some of the friends of Sion, â€œamigos de Sionâ€, who work as volunteers to help in the mission of Our Lady of Sion. They prepare young people to be baptized, they work with children who need help in school by giving them lessons in the various subjects; they pray the family rosary, by which young and older people fall in love with the Word of God as lived and shared in Sion. They teach weekly Bible classes using Jewish sources of interpretation, they explain the celebration ofÂ  Shabbat, teach the meaning of the Jewish feasts, and are attentive to homilies in which the love Jesus shares with his people is not respected.

Here in Brazil, just as in Europe, the Church has to learn to become a church where the initiative of individuals and of the faith community is required. And so a profound knowledge of the Word of God is important, which we sisters and lay people acquire by regularly reading and studying the Bible.

I have met many of the sisters’ families, visited their houses which seem small from the outside, but which are very long inside with beautiful decorations. Meeting Jilvaneide’s grandmother on the farm was aÂ  special moment; this lady walked towards me with her parrot perched on her shoulder and on legs that are carrying many years.

In Divina Pastora, we met the contemplative sisters who welcomed us into their home. There, the Brazilian formation team and I shared our concerns for formation in Sion. In our sharing, we realized that our young people need to be formed for religious life so as to live the charism in a mission project before going on to long-term studies in theology or social work, interfaith encounter or as educators in the Sion schools.

Now, in the community of Aracaju, other adventures await me. The first afternoon, we visited Lucia’s family; I metÂ  her brother whose eyes began to shine when he, a student of engineering, told of the many encounters during the WYD in Rio de Janeiro, Brazil, in July 2013. There he also met Mina, a young man from Berba who served as a volunteer during the WYD.

The countryside from where Lucia, one of the future novices comes, has its own beauty. Back in the community of Aracaju, friends of Sion shared the evening with us. There I had the opportunity to share my experience of Egypt, of Berba. At the end of the day I also shared the difficulty of living the charism when churches andÂ  private houses burn because of political opinions.

The next day, we visited the Oasis center; it is an organization of the Friends of Sion and helps young children with their studies: http://oasisamigosdesion.blogspot.com.br

It is located on the outskirts of Aracaju, where crime-related difficulties are the norm and children live in deprived and abused family situations.

In Salvador, someone who helps the sisters welcomed us, picking us up at the airport and driving us to the home of the sisters and of friends of Sion. This was the first time I met a community in which a single mother, an associate of Sion, also lives with her little daughter Cecilia, who is eight years old.Â  In their community, the entry into Sunday is celebrated by reading and studying the parashat (the week’s liturgical portion of the Torah) sent by the Bat Kol program.

Sr. Valdete serves in the kindergarten with 220 children in Fazenda Coutos, a very poor area on the outskirts of Salvador. PIM, the program that introduces to musical education, contributes to intellectual formation by means of music. Teaching about the people’s original culture that comes from Africa is part of this program. PIM stands for education through dance and music; about 75 children participate in this program, which takes place in the afternoon after regular classes. http://www.projetopim.com/default.aspx

All four Sion communities in the North-East are open communities, where friends of Sion or associates work and live with the Sion sisters. Our prayer was prepared by Edna, an associate of Sion who lives partly in the house and who is studying the behavior of parents with their children at the university. During the prayer, we were asked to look at the light and to see what it is telling us. I realized that light changes reality. It certainly changed my reality in visiting some of the communities in Brazil. I thank all the sisters, friends and associates of Sion who opened their communities and their family’s houses and shared their life with me. 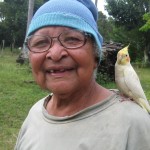 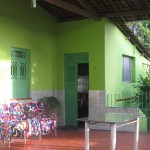 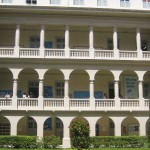 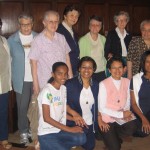 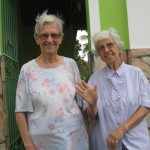 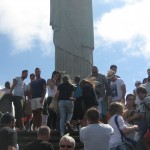 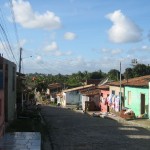 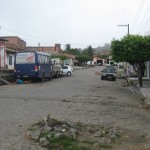 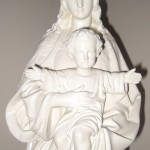 Our Lady of Sion Aracaju 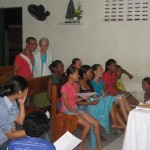 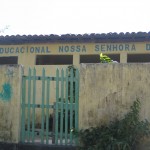