Returning to Jerusalem, Alphonse continued to consolidate the three works of Sion, Ecce Homo, Ein Kerem and St. Peter’s. In spite of being half-blind, often ill and crushed by the workload, he never lost confidence. He continued to draw inspiration from the fact that had been granted the privilege of ‘pitching his tent” in Jerusalem. He lived continually in Mary’s presence. News of Theodore’s death, 10th of January 1884, left Alphonse deeply saddened. With his own health declining and eyesight failing, he would sit alone in his small house looking towards Mary’s shrine in the garden of Ein Kerem. A few weeks before his death, he confided to Fr. Estrate, the revered superior general of the Sacred Heart of Betharram and Alphonse’s Spiritual Director, “I do not know why I, a poor sinner, not only do not fear death but long for it. My ardent wish is to die with the Memorare on my lips.” Alphonse also made this request to Father Estrate, “When I am on my death bed, do not suggest to me the invocations usually suggested to the dying. Say only one word, ‘Mary’. This word will penetrate the depths of my soul.” A few hours before his death which occurred on 6th of May 1884, Alphonse exclaimed, “Why are you killing me with medication? The blessed Virgin is calling me and I am ready. Just Mary! For me, she is everything. The Word, ‘Mary’, contains all.” 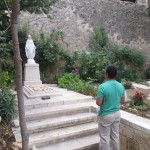 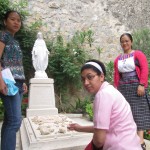 at the Tomb of Fr. Mary Alphonse 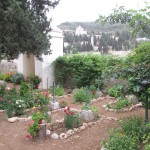 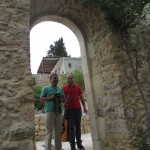 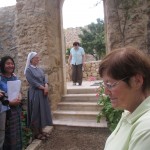 sisters are comming to 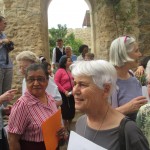 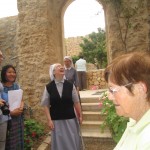 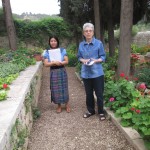 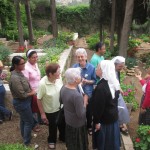 in the cemetary of Ein Karem.