Before attending the 26th Chapter of the Congregation of Our Lady of Sion, which is being held in Sao Paulo Brazil, some of the delegates gathered for a 3-day immersion in Sao Paulo. Other delegates travelled to other parts of Brazil for their immersion days.

We began our immersion time on Monday, June 20th with a prayer together. During this time, we were each presented with a journal to use to reflect on our experiences of the 3-day immersion in Sao Paulo. The key questions we were given were:

This opening prayer time was followed by a short introduction class called “Brazilian context: Social, Political, Economic and Cultural” with Marcelo Sarraino, one of the teachers in the Higieonopolis Sion school.

Tuesday morning, our schedule began by visiting the Higienopolis Sion school that has an enrolment of about 900 students. Some of the high school students showed us around and informed us about the school in very good English. We also had an opportunity to paint fish with one of the kindergarten classes.

Then we went to the St. Martino community centre where about 800 to 1.000 street people receive a daily meal organized by the diocese. The centre also offers training in various areas such as computers and graphics. It was moving to see some of them reading in the library. Ecumenical biblical reflections, in which Gisa an 84-year-old Sister of Sion is involved, are offered once a week.

Following this, we visited the Sion school of Villa Maria, which has been classified as the best school in that district of São Paulo. It has a swimming pool, ballet and Judo classes along with art and music corners. There is an emphasis on education being formation.

We closed our day by walking down Paulista Avenue, a huge financial area, where we had supper in one of the shopping malls before returning to our home base by a city bus.

June 21st, we visited Etz Chaim synagogue where Rabbi Holtz addressed us.
It devotes a lot of time to interfaith dialogue, especially Catholic – Jewish dialogue but it also has dialogue with other Christian denominations and with Muslim groups. He spoke of the different kinds of dialogue and emphasized the importance of a dialogue whose objective is to work together to build a better world and of the importance of personal connections and relationships as a way of building trust.

Some Germans who escaped Nazi Germany founded the Synagogue in 1930, and today it is a cultural and religious institution to which about 4.000 people about 1.500 families are connected. It has strong youth groups, connected to reform and liberal movements.

Our next stop was at the House of Reconciliation where Sr. Gisa has had a long history of involvement. Sr. Cristiane is also working there one day a week. We were very fortunate to hear the experiences of a bishop from the Amazon who happened to be present that day. After a wonderful lunch of local food, we listened to Fr. Bison sharing the work of the centre, which is one of dialogue and reconciliation. Along with the usual groups, they have begun a dialogue with an AfroBrazilian religion. He finished his sharing by challenging us not to forget our charism.

From there we went to the AfroBrasilian Museum. Our guide, a young man from the AfroBrazilian community, shared his knowledge with us. Brazil had 400 years of slavery that was only abolished in 1888 becoming the last country in the world to do so. Today, 53% of Brazil is AfroBrazilian. He emphasized that this community has had a huge influence on Brazilian culture.

We finished our day by the visiting the General council of the Religious of Sion (brothers and fathers). Before a fine meal, one sister shared the history of Sion sisters in Brazil and Fr. Donezeti shared the history of the brothers. We had a long pleasant evening with them enjoying their hospitality and the warmth both of a fireplace on a cold night and of their simplicity and caring spirit for us sisters.

This morning began with a visit to the Caritas refugee centre. The centre provides services for refugees come from various parts of world with the largest number from Africa. They assist them with their paper work; finding housing, work, and language classes; and provide mental health assistance for those who might be in need of it. We learned that in Brazil that the refugee claimants receive documents and the rights of Brazilians (not voting) while their claim is being researched.

In the afternoon, we visited the Islamic centre. They bring together Jewish, Muslim, and Christian youth for interfaith and intercultural dialogue on a regular basis and for special conferences, of various topics. At present, they are planning a retreat weekend on spirituality. They find that while young people indicate a willingness to come, they often don’t have the time. There can also be some family resistance. We were touched by the fact that we were served tea and delicious home baking even though they were observing the Ramadan fast.

Our last visit was to one of the slums of São Paulo. We learned that they prefer to be called a community rather than a favela. A woman, who is involved with the community, took us around. We visited a day care centre, which receives financial assistance from the diocese. We also visited a lay religious community who try to live like the poor of the community and are involved with the day care centre. At present, there are 5 very young women living there. There was also an opportunity to stop to talk for a short time with one of the women who is a leader in the community. She was very proud to take a few of us around to show her very simple little house that she had built herself. Sr. Zeze shared with us the project that she does with the students of the Higeinopolis school to assist the members of the community. People were very welcoming.

We finished the day by sharing our experiences with the sisters of the Higienopolis community. They in turn treated us to some typical food of Brazil. We were very happy to share this celebration on the eve of the feast of St. John the Baptist. 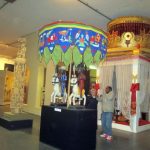 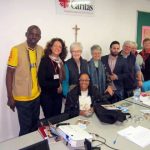 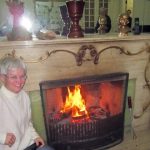 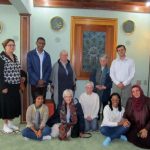 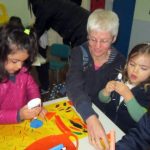 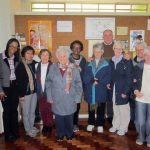 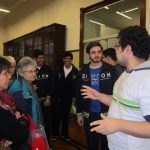 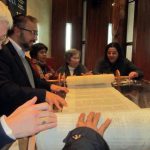 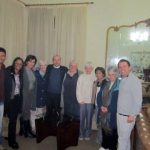 We were very grateful to Sr. Cristiane and Sr. Zeze for all the work that goes into planning and carrying out such an immersion!