Quetzaltenango, or to use its indigenous name Xela, is the city where I am studying Spanish. Xela is at an altitude of 2.300 meters, and in the first days I felt this quite stronge as my blood pressure incrised. The region of Xela has a population of about 225.000 people. 61% of them are indigenous people, 34% Latinos and 5% Europeans. The city was founded on May 7th, 1524.

There are about nine Catholic churches, as well as the biggest temple of the Mormons in Central America. You don’t count the Protestant and Evangelical churches as there are so many. Baptist and free churches can also be found everywhere. The Mayan culture is mixed in especially with the Catholic Christian faith. The women dress in colourful clothes and carry their children wrapped up on their back. The rural Guatemalans are short: men are no taller than I and women are much smaller. The people in the city seem to be a more mixed population; they are called Latinos and are taller and with a lighter colour. November 1st is a big feast for the dead, similar to Austria. On that day, the graves of the deceased are newly painted and decorated with flowers, the whole family, including the family dog, visits and spends the day with the dead.

We where visiting the location where the first church in Guatemala was built by Jesuit missionaries. The church has the form of a ship.The first Â Franssiscan Â Mission in Guatemala.

One day, seven of us, students went to Sun-bonga, the place where on November 1st every year big, beautiful kites are flown. This tradition goes back to the Mayan culture. In the past these kites where flown to connect the earth with heaven, and these beautiful kites bring a message from earth to heaven. In Catholic tradition, the Mayan tradition became the day on which the people on earth connect with their deceased ancestors who are in heaven with God. It is a cultural festival of Guatemala and people from all over the world come to see the beautiful kites that are flown in the sky. We as a group also went on to visit the old city of Guatemala Antiqua, where Spanish culture is visible in all the buildings and in the historic churches, some of which are in ruins.

A day of mountain hiking

At 6 a.m. four students and a guide drove to the volcano Chikabal. From there one can see the other 5 volcanoes (Stata Maria, Zunil, Santiaguito, La Muela…) of Xela. The volcano Santiaguito is an active volcano; all the others are dead. We could see from the distance small eruptions before we went down about 520 steps to the crater of the volcano Chikabal, which is a Mayan holy place. The crater is filled with crystal-clear water. We walked around the lake before going up the steps again, when we could again walk down the volcano. I came home exhausted, as on the top of the volcano you are at an altitude of 2.900 meters.

Now I know why many houses of Xela are all built with only one or at most two floors. Last night I had my first experience of an earthquake in Xela, and I was told they are frequent. Smoke rises daily from the volcano, and I was told that is why you always have clouds in Xela.

Sunday is my volunteer work day and I go to the care centre for mentally handicapped children. There are 61 children in this place, from babies to young adults and most of them are in wheelchairs. They are cared for by the Franciscan Sisters of the Apparition. 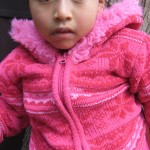 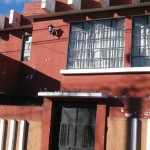 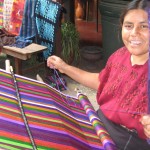 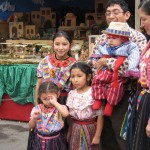 I live with a Catholic family; they have two grownup children at university level. The daughter is a single mother of an 8-year old boy, called Fabian. The father left them shortly after the boy was born. My experience in the family has been very positive, and it has shown me some of the culture in eating habits, everyday life and the difficulties which arise because of political and social insecurity.

My last days in Xela have been filled with getting the verbs right, present, past and future. All are supposed to be memorised and used correctly. I am thankful for my experience of living in a Latin American culture for a short time and especially that this time it has been in the Mayan culture. The sharing with the teacher has been very valuable for me; through her I could not only learn the language but also much about the living conditions which we shared with one another. Here I realised that in some points the social difficulties seem similar to those in Egypt: healthcare, the school system, and unemployment for the young.

I also introduced my teacher to the Bible, as I was using the children’s Bible that has been translated for the children of the world (by â€œKirche in Not / Aid for church in needâ€Â into 57 languages). In doing so, I acquired some reading skills. My teacher, who is a Catholic, was grateful as for the first time she read stories from the Old Testament. At the end I bought her a gift, and what do you think it was? A Bible and the children’s Bible for her son, who is 8 years old. We talked a lot about faith and also about the beliefs of the Mayan people.

Now I can go to Costa Rica and be able to communicate a little with the sisters there and share life with them. I look forward being able to spend two weeks in Costa Rica now, where I can practise the Spanish I learned and share the sisters’ Christmas celebrations before I go and celebrate Christmas again in Egypt with all the Christians there.

Good-bye Guatemala and thank you! I will miss you and the volcano Santa Maria which protects Xela and has been in full view from my classroom for 5 hours every day.

Thanks to the de Valerio family who welcomed me into their house and home and made my stay in Xela a beautiful experience.

Thanks to all my sisters for this experience of learning so that I can now go and begin my new mission, taking up the responsibility of formation in the International Novitiate in Jerusalem.