On December 1st and 7th, our classes with Sr. Anne Catherine discussed about Hanukkah and Christmas. Do these two celebrations have any correlation with one another? We discussed this question by examining the celebration of Hanukkah, which is a Jewish holiday that is celebrated also in December and which actually will happen this year on the same date as Christmas. We looked at the background of both of these celebrations by readings some Scripture texts of the Old Testament and New Testament.

In the readings from 1 Maccabee 4: 36-56 and 2 Maccabee 10: 1-8, the festival of Hanukkah was instituted by Judah Maccabee and his brothers to celebrate this event. According to the Talmud, at the re-dedication of the Temple in Jerusalem following the victory of the Maccabees over the Seleucid Empire, there was only enough oil to light the menorah in the Temple for one day. Miraculously, the oil burned for eight days, the time needed to prepare a new supply of oil. Therefore, Hanukkah commemorates this miracle and symbolizes the miraculous survival of the Jewish people through the millennia of suffering and persecution. This Feast is also known as the festival of lights. It is an annual eight-day Jewish holiday beginning on the 25th day of the 10th month of Kislev, which falls between late November and late December, depending on the particular year. Hanukkah is celebrated by the lighting of candles on each night of the holiday – one on the first night, two on the second, and so on.
As the Feast of the Hanukkah falls at the 25th of Kislev and Christmas falls on December 25th. Is it a coincidence of dates? It is not clear – knowing that Christmas itself and the dates of its celebration were influenced by earlier pagan winter celebrations. According to one of the theories, it happened during the reign of Constantine, Emperor of Rome, in the 4th century AD. Christian writers assimilated this feast as the birthday of Jesus, associating Him with the “sun of righteousness” mentioned in Malachi 4:2 (Sol Iustitiae). It is in this understanding of how and when Christmas was established that we find this intersection of Hanukkah, Christmas, and the birthday of the Sun God. 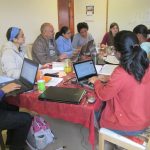 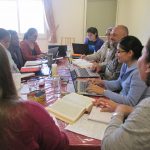 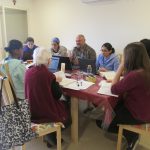 We notice that the two texts of the New Testament confirm the messianic aspect of Hanukkah. Because on the day of Hanukkah Jesus was asked the messianic question: tell us if you are the Christ of not (John 10:22-24)? The other text is the two disciples of Emmaus: they were disappointed because Jesus as the Messiah was to deliver them from the Romans and now he had died. So they went to Emmaus to do a kind of pilgrimage to a place where Judah Maccabee had defeated the Greeks (see 1 Maccabee 4). As Jesus joined and walked with them, he showed them what kind of salvation he came to bring: the light of his resurrection.

So we can conclude whether there is a connection or not between Christmas and Hanukkah, we can celebrate with the Jews the light of God and wish that it will illuminate the world and bring the true Salvation. Here in the Jewish context there is no external sign of Christmas like in many other countries. So it is an invitation for us to build our own Christmas together with the Christian minority and to go deeper into the meaning of God who became of human being, to be part of humanity and history.