To celebrate the year of Mercy, we the family of Sion and friends had a special celebration on September 4th at Gethsemane – in the Basilica of the Agony.

“Here, then, is the reason for the Jubilee: because this is the time for mercy. It is the favorable time to heal wounds, a time not to be weary of meeting all those who are waiting to see and to touch with their hands the signs of closeness and reconciliation”. Pope Francis. 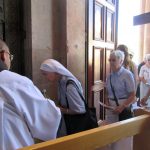 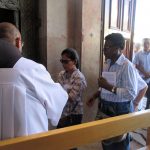 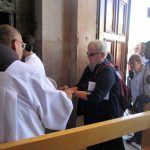 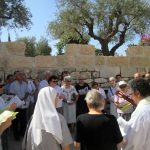 We started the Mass outside the Basilica with the penitential rite, after we entered in a procession receiving holy water and in silence. Each one took time to pray at the rock, where Jesus had his last prayer before he was betrayed and arrested by the Roman soldiers. We enjoyed that time to ask God forgiveness for the violence, the discrimination, prejudices, lack of acceptance of differences and lack of mercy in our world. Then after that we walked to the Ecce Homo to continue our Mass.

The Mass was presided by Fr. Carlos NDS and deacon Luciano. The homily was more interesting than anything we had ever heard about the mercy of God, in Luke 15, 11-31 “the prodigal son”.

Carlos began saying that when we were children, we are educated to not receive anything from strangers and he made a connection with the oldest son, from the gospel of the prodigal son.

With that reflection Sr. Juliana NDS related with Peter and Judas. Both sinned against Jesus at the time that Jesus most needed them, but only Peter was able to know the mercy of God. Peter repented, returned to Jesus and asked for forgiveness, because he was sure of the mercy of Jesus and he had a deep relationship with Jesus.

We can only experience God´s mercy when we know him and have a deep and true relationship with Him. And also when we are able to reveal ourselves to Him as daughters and sons.

We finished our celebration with a delicious lunch together.