Clara and I – Alejandra – arrived together in Cairo because she applied for her visa for Tunis from here.

Three weeks living in Cairo and Berba has been a huge blessing in my life. Everything that I see everyday surprises me. I find it completely different from my country (Guatemala) for example the culture, language, food and the liturgy of the mass too. Going to different places helps me to see the whole picture of the country. Some places caught my
attention very much especially going to Berba we enjoyed the view of the fields full of wheat and corn. My impression that in Egypt cows, donkeys and sheep are everywhere. In Berba every morning the people go with the animals to the fields and come back at sunset.

I remember the first day when we arrived in Berba, Sister Jackie with all the children and the teachers were waiting for us in front of our house and they welcomed us with a warm greeting and a big smile saying in Spanish “Bienvenida”. Sinse that moment I felt I was at home. In the afternoon after our arrival we went to visit the parents of our sisters who live in Berba. When we started walking in the street the people looked at us and they ran to greet us because they know already Sister Darlene and Sister Jackie. The people were greeting the sisters with all their love and full of joy. They greeted us even without knowing us.

During our time in Berba we did some activities with the children, like art, crafts and some English in the Kindergarten and we also visited some families. Sharing activities with the children was a big pleasure for them and for us too. They enjoyed it very much and did not want to go home because they wanted to spend more time with us. Sister Darlene and Sister Jackie always translated for Clara an me and for the children too in order for us to understand each other. I am saying „sharing” with the children because we learned some Arabic words and they learned some English too. I saw their
happiness while we were with them which is a positive value in them because they want to know and learn new things.
The day of the catechism in the church I was shocked because there were one hundred and ten children and twenty young catechists. I found it very positive and well organized, for example before they went into small groups they had an introduction together. It surprised me seeing this number of children in a village and in a Muslim Country. I must say it is a blessing for the church and the village too.

Living in Cairo is completely different from Berba. I went some days to Caritas where Sister Mona is responsible for the kindergarten. I chose to be with the babies and I like them very much. When Clara and I were there the first day the babies were crying because they did not know us but the second day it was as if they had known me for
ever. (Clara left that day for Tunis.)

Sister Darlene has taken me to some interesting places. We went to Old Cairo where we visited the oldest Synagogue and some very old Churches. We visited a Cave Church which is located in the Mokattam mountain in Cairo in an area that is known as the “Rubbish City” because there is a huge population of rubbish collectors. And of course we saw the Pyramids and the Nile River. 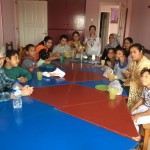 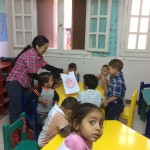 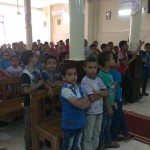 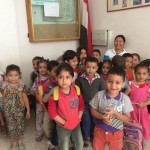 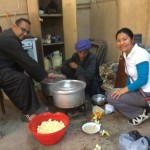 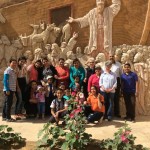 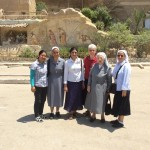